How to read SAT math charts and graphs?

HOW TO READ CHARTS AND GRAPHS

Another basic math skill you will need for the SAT is the ability to interpret data from charts, graphs, tables, and more. This section will cover the basics of reading these figures.

What's Up with All These Figures?

The SAT now includes charts, graphs, and tables throughout the test (not just in the Math sections) to present data for students to analyze. ETS believes this will better reflect what students learn in school and need to understand in the real world. The situations will typically include real-life applications, such as finance and business situations, social science issues, and scientific matter.

Since you'll be seeing graphics throughout the test, let's look at the types you may encounter and the skills you'll need to be familiar with when you work with charts and graphs.

A scatterplot is a graph with distinct data points, each representing one piece of information. On the scatterplot below, each dot represents the number of televisions sold at a certain price point. 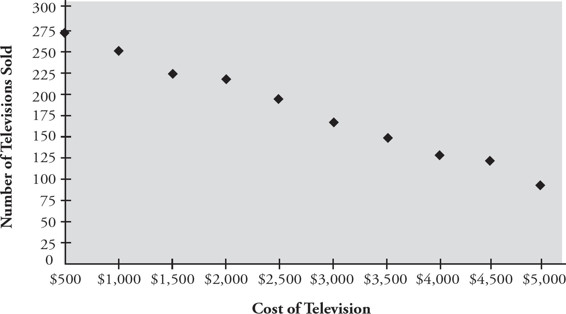 To find the cost of a television when 225 televisions are sold, start at 225 on the vertical axis and draw a horizontal line to the right until you hit a data point. Use the edge of your answer sheet as a straight-edge if you have trouble drawing your own straight lines. Once you hit a point, draw a straight line down from it to the horizontal axis and read the number the line hits, which should be $1,500. To determine the number of televisions sold when they cost a certain amount, reverse the steps—start at the bottom, draw up until you hit a point, then move left until you intersect the vertical axis.

A question may ask you to draw a "line of best fit" on a scatterplot diagram. This is the line that best represents the data. You can use the edge of your answer sheet as a ruler to help you draw a line that goes through most of the data.

A line graph is similar to a scatterplot in that it shows different data points that relate the two variables. The difference with a line graph, though, is that the points have been connected to create a continuous line. 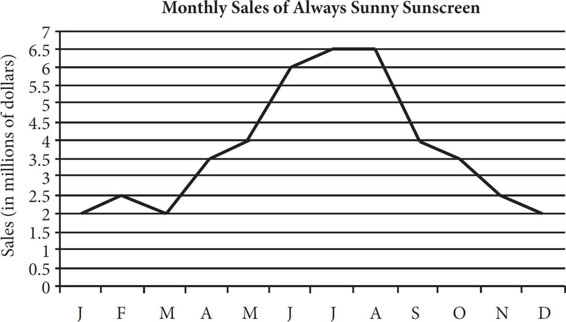 Reading a line graph is very similar to reading a scatterplot. Start at the axis that represents the data given, and draw a straight line up or to the right until you intersect the graph line. Then move left or down until you hit the other axis. For example, in February, indicated by an F on the horizontal axis, Always Sunny sunscreen had 2.5 million in sales. Make sure to notice the units on each axis. If February sales were only $2.50, rather than $2.5 million, then this company wouldn't be doing very well!

Let's look at a question about this line graph.

Look up the values for each period in question and use Process of Elimination to get rid of those that don't fit. For (A), January sales are forecasted to be $2 million, February $2.5 million, and March $2 million. This is an increase then a decrease, not the other way around, so eliminate (A). For (B), you already know sales decreased from February to March, so check for a following increase in April. The figure for April is $3.5 million, which is an increase over the March figure, so (B) is correct.

The Bar Graph (or Histogram)

Instead of showing a variety of different data points, a bar graph will show how many items belong to a particular category. If the variable at the bottom is given in ranges, instead of distinct items, the graph is called a histogram, but you read it the same way. 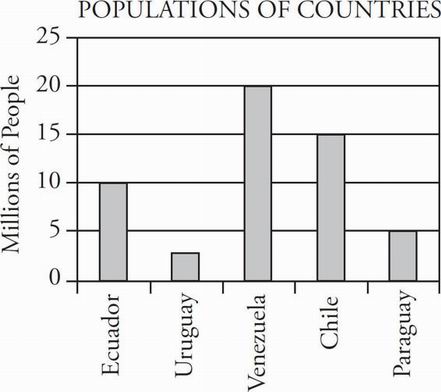 The height of each bar corresponds to a value on the vertical axis. In this case, the bar above Chile hits the line that intersects with 15 on the vertical axis, so there are 15 million people in Chile. Again, watch the units to make sure you know what the numbers on the axes represent. On this graph, horizontal lines are drawn at 5 unit intervals, making the graph easier to read. If these lines do not appear on a bar graph, use your answer sheet to determine the height of a given bar.

14 . The populations of five countries are shown in the graph above. If population density is defined as

Start by determining the population of Paraguay. The bar hits right at the horizontal line for 5, which is in millions, so there are 5 million people in Paraguay. Now use the definition of population density in the question.

Be very careful with the number of zeroes you put in the fraction—the answer choices are pairs that vary by a factor of 10, meaning ETS expects you to miss a zero. The answer must be greater than 1, since your numerator is bigger than your denominator, so eliminate (A) and (B). Choice (C) also seems too small, but check the math on your calculator (carefully). You should get 12.5 people per square kilometer, so (D) is correct.

A two-way table is another way to represent data without actually graphing it. Instead of having the variables represented on the vertical and horizontal axes, the data will be arranged in rows and columns. The top row will give the headings for each column, and the left-most column will give the headings for each row. The numbers in each box indicate the data for the category represented by the row and the column the box is in.

If you wanted to see the number of computers produced on Tuesday morning, you could start in the Morning Shift column and look down until you found the number in the row that says, "Tuesday," or you could start in the row for Tuesday and look to the right until you found the Morning Shift column. Either way, the result is 245. Some tables will give you totals in the bottom row and/or the right-most column, but sometimes you will need to find the totals yourself by adding up all the numbers in each row or in each column. More complicated tables will have more categories listed in rows and/or columns, or the tables may even contain extraneous information.

Give this one a try.

3. Computer production at a factory occurs during two shifts, as shown in the chart above. If computers are produced only during the morning and afternoon shifts, on which of the following pairs of days is the greatest total number of computers produced?

Every time you encounter a figure or graphic on the SAT, you should make sure you understand how to read it by checking the following things:

- What are the variables for each axis or the headings for the table?
- What units are used for each variable?
- Are there any key pieces of information (numbers, for example) in the legend of the chart that you should note?
- What type of relationship is shown by the data in the chart? For instance, if the chart includes curves that show an upward slope, then the graph shows a positive association, while curves that show a downward slope show a negative association.
- You can use the edge of your answer sheet as a ruler to help you make sure you are locating the correct data in the graph or to draw a line of best fit if necessary.