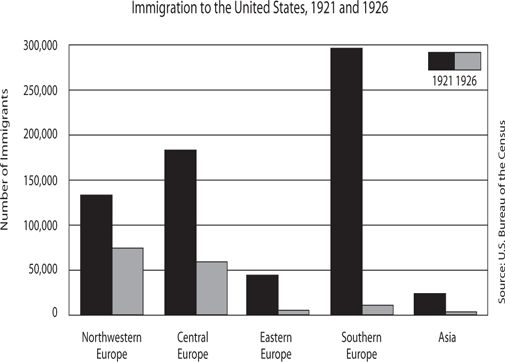 The graph clearly shows that European immigration, especially immigration from Southern and Eastern Europe, dropped between 1921 and 1926. The cause of the drop was the antiimmigration legislation of the 1920s. The United States did not experience a drop in the economy in the 1920s (A)-industrial production expanded. Totalitarianism (B) did emerge in Russia and Italy in the 1920s, but these regimes did not implement excessively restrictive migration policies. The Soviet Union did severely limit migration later-from Stalin's rule until Gorbachev's glasnost policies. German submarine warfare (D) occurred during World War II not in the 1920s. Europe was rebuilding during the 1920s (E) and did not experience the same level of industrial expansion as the United States.