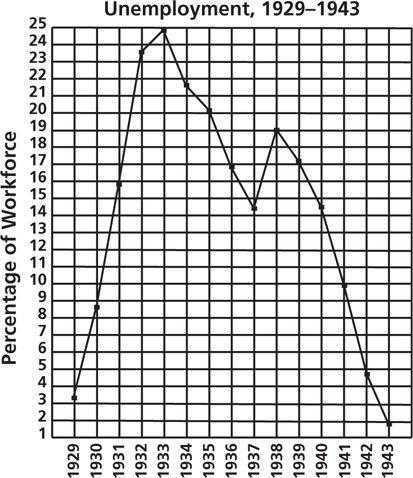 Based on the graph above, which statement best explains the changes in the unemployment figures between 1941 and 1943?

A. The programs of the New Deal were effective in ending the Depression of 1929.
B. The United States had become involved in World War II.
C. More women had found employment outside of the home.
D. New technology had developed, which led to greater employment.
E. The Depression was more severe than most economists realized.

The graph indicates that there was a large drop in unemployment from 1941 to 1943. This is when the United States became more involved in World War II. The Lend-Lease Law, passed in March 1941, established the United States as the "arsenal of democracy." The United States entered the war in December 1941, following the Japanese bombing of Pearl Harbor. Both Lend-Lease and the U.S. entrance into the war resulted in a greater demand for labor. The chart shows that the New Deal had had a limited effect (A). Women did enter the workforce after World War II, but that is not demonstrated in the chart (C). The chart does not allude to technological innovation (D). The rising employment figures represent an end to the Depression, not its persistence (E).