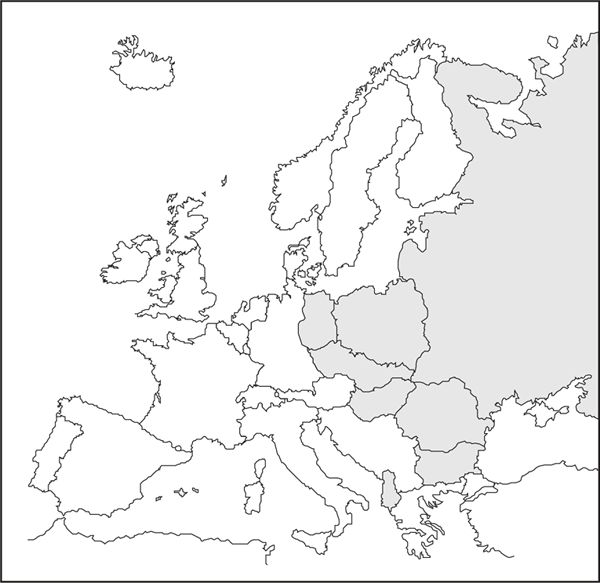 The shaded area in the map above shows

A. the Axis Powers.
B. the Warsaw Pact.
C. the League of Nations.
D. the Allied Powers in World War II.
E. NATO.

The Warsaw Pact, signed in Warsaw, Poland, in 1955 by the Soviet Union and its satellite states in Eastern Europe, formed a military alliance to balance NATO. The Warsaw Pact was signed by Albania, Bulgaria, Czechoslovakia, East Germany (German Democratic Republic), Hungary, Poland, Romania, and the USSR-all of which are shaded on this map. The Axis Powers (A) refers to Germany and its allies in World War II. The League of Nations (C), which included most of the European nations, was formed after World War I to promote peace. The Allied Powers in World War II (D) were those fighting against Germany, including Britain, France, the Soviet Union, and the United States. Formed to stop the spread of Soviet power and influence after World War II, NATO, or the North Atlantic Treaty Organization (E), was a military alliance that included most Western European nations along with the United States and Canada.