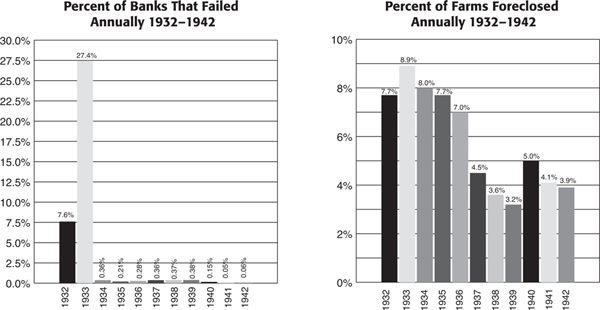 A. had little effect on the number of farmers who lost their land as a result of the Great Depression.
B. helped protect depositors and farmers from the effects of the Great Depression.
C. failed to prevent bank failures.
D. had no significant effect on farm foreclosures or bank failures until the outbreak of World War II.
E. was directly responsible for the establishment of the Federal Reserve System.

The charts show the decrease in the number of bank failures and foreclosures during the course of the New Deal. The New Deal protected both depositors and farmers from the ill effects of the Depression. The chart shows the decrease in foreclosures on farms (A) from 1932 to 1939 with only a slight increase in 1941 and subsequent declines in 1941 and 1942. Bank failures dropped (C) from 7.6 percent in 1932 to 0.06 percent in 1942. The United States entered World War II in 1941, but bank failures and foreclosures had decreased (D) prior to the outbreak of the war. The Federal Reserve System (E) was established in 1913 under the Wilson Administration well before this time period, although its powers were expanded during the Great Depression. The Federal Deposit Insurance Corporation was established in 1933 under the Glass-Steagall Banking Reform Act to protect depositors' money.