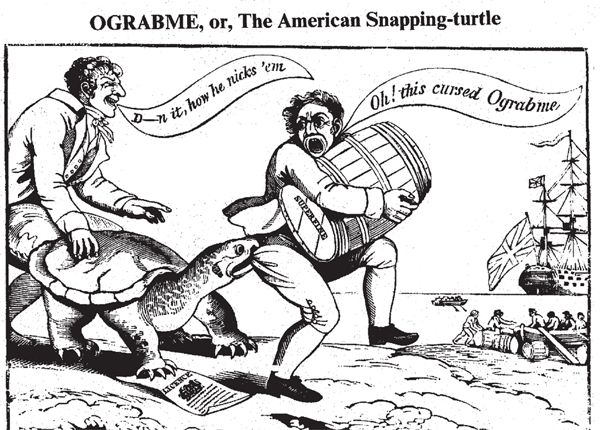 The cartoonist was most likely portraying discontent over the issue of

A. Federalist control of the judiciary.
B. state control of interstate commerce.
C. impressment of U.S. seamen by captains of British ships.
D. the Citizen Genet affair.
E. the embargo imposed by Presidents Jefferson and Madison.

A 90-day embargo was passed by James Madison in 1813. Both acts were passed to protect American shipping from harassment by the English and French. It is clear that the issue in the cartoon is the embargo because "OGRABME" is embargo spelled backward. The cartoonist was portraying the discontent, particularly among New Englanders, over the Embargo, which was first passed in 1807 under the administration of Thomas Jefferson. The Federalists (A) controlled the judiciary, but that is not the subject of the cartoon. The issue of the embargo dealt with foreign commerce, not interstate commerce (B). Impressment (C) of U.S. seamen was one of the key causes of the War of 1812 but not the subject of this cartoon. The Citizen Genet affair (D) occurred during the administration of George Washington in 1793.